Proudly Serving For Over Fifty Years 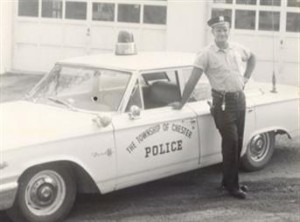 The Chester Township Police Department was instituted in modern form in 1957 with the hiring of Edward M. Strait, who as our first full-time police officer immediately set out to organize a well-trained and regulated association of part-time volunteer officers to assist him in his duties. Patrolman Strait was named the department’s first Chief of Police in early 1958 and never looked back. He was joined by additional full-time officers in the mid 1960’s, some whose names you may remember, Harold Dilley, Richard N. Darling and Vernice “Skip” Robbins. The Department grew steadily in terms of manpower and expertise under Chief Strait’s watch with Wandy Cox, Lou Case, Jeff Smith, Steve Beyer and Craig Young all beginning their careers in the early 1970’s. Both Strait and the Department achieved public acclaim as being both efficient and progressive. Special and Reserve Officers served their community with countless hours of volunteer time, sharing the same risks facing the full-timers. One hundred and five officers served with the reserve as members of the Chester Police Association through 1984 when the association was disbanded.